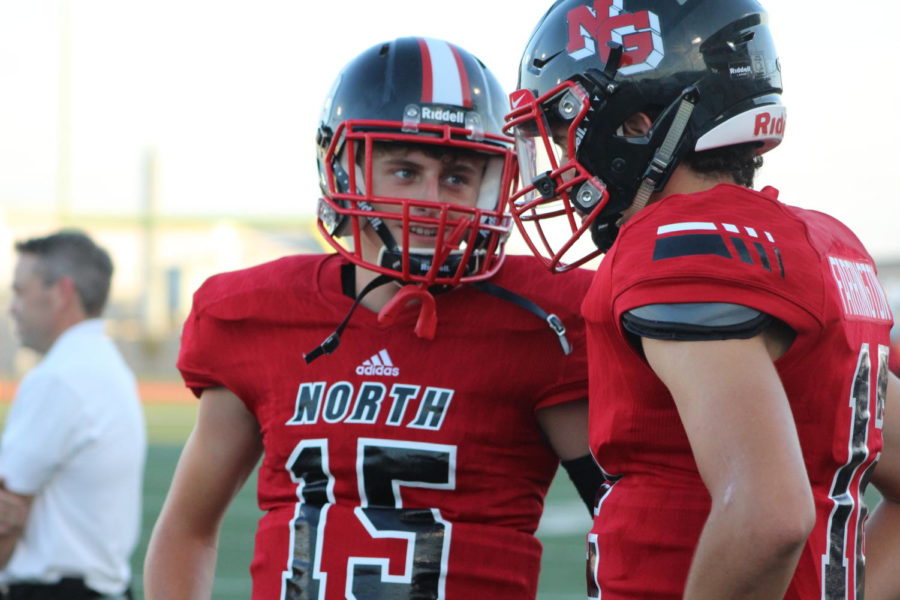 Going into high school, I always had this dream of being on ESPN. At first, that dream was to be playing on the football field winning championships for the Dallas Cowboys, but I’ve come to realize that my real dream is to be there as an analyst. I knew what I wanted to do with my life, but I had no idea where to start. I had never written a story for anyone, studied the correct techniques or even have enough knowledge about the industry itself. I wasn’t sure what it would take to get there, which is why that’s why I chose to join journalism.

As a freshman, you really don’t know what to expect from school. Even what an older sibling tells you can be outdated as new generations change the landscape of high school every year. So, I didn’t know what I was getting into with journalism. The first semester of Journalism 1 was pretty rough. We constantly did work and projects on politics, which I understand is a very big part of news today, but it’s not my forté. After the break however, we had a change in teaching, as Mrs. Williamson took over the journalism program. She reminded me why I wanted to be a journalist to begin with. We started to really learn how to write a proper story, and she made the class enjoyable. I still remember her asking me to be apart of the newspaper staff for the next school year.

I started sophomore year as the sports reporter, and I was still getting used to the writing style. My first story was about our school football team, and after it was finished, I had this indescribable feeling of joy from reading my own official story in a paper. It showed me that I wanted my stories to be on ESPN or The Landry Hat, a newspage for the Cowboys. I feel like I can honestly see my name on there some day.

I started to practice my skills through rough drafts and really picking up on the different AP style techniques, and I got better at writing. I even wrote a feature story on racial injustice that won an award with the Dallas Morning News, but I just came to terms with myself that my love for writing was in sports.

As time passed, my outlook on sports reporting changed, and I stopped looking at it from a fan’s standpoint and from more of a reporter standpoint. From seeing what they do and how they deliver the message they are trying to get across, to the way they input facts and stats into their stories and how they use those stats to back up what they’re saying, I used those skills to make my stories sound like they came from a professional and not just some high school kid doing it for fun.

I take pride in what I’m writing because I want colleges to look at my stories and tell that I’m truly passionate about my writing.

I’m now a junior, and I can feel myself maturing by the day. I recently got my first job at Sonic (we accept tips, by the way), and I’ve also started driving. Having a job on top of playing football gives me very little free time. I don’t even watch TV anymore, unless there is a game on or I want to hear what they’re talking about on Sportscenter. This will make me sound like an old man, but when I drive places I don’t even listen to music. I just listen to the local sports radio, so I can hear different opinions and outlooks on subjects to truly understand what’s going on in the sports world. When I’m eating, I will pull up YouTube and listen to Stephen A. Smith’s crazy antics because even though he has a ridiculous personality, he still makes some very good points. But in my mind, I feel that I can be better than him and anyone else they have on ESPN. I once watched a video where Dallas Mavericks’ owner Mark Cuban pointed out some great things to sports analyst Skip Bayless including the  defensive schemes and zones that they ran to contain LeBron James in the 2011 NBA Finals, but Skip Bayless was too focused on his personal opinion of LeBron James making claims that James just “didn’t want it enough” and “he just choked” and I realized that I can bring a different outlook into the analyst world. There are too many instances where analysts are opinionated and make too many generalizations when speaking on a topic, and they don’t always provide the real facts, like how teams plan for opponents.

Sure, there’s a lot of work that goes into making a news story, but I think it’s worth it. For me, there’s no better career than waking up to talk about new sports topics everyday. There are so many instances in the world where people hate their jobs because it’s the same things everyday, and the cycle can become long and boring, but for sports, there’s always a new season, there’s always exciting free agencies and drafts, there’s always a new champion for every sport to talk about. The possibilities of topics are endless, and no matter which one’s I talk about, I want people hear what I say and think that I’m the greatest at what I do.